A cohesive team is great to be in. There is energy and focus within a cohesive team that makes the team stand out from others. Not only does it feel good, but cohesion has been shown to be related to a bunch of good things: team performance, team efficiency, team members putting in effort out of hours, lower absenteeism. So what is the magic of cohesion, and how can you get some for your team?

First, what do we mean when we say “cohesion”? As is often the case, the most vivid expressions come from people we’ve worked with:

– Participant in Science of Teams workshop at AgilePT, Porto, May 2015

We all have a feel for what cohesion looks like in practice, but in order to assess it and work with it, it’s important to note that it comes in two different flavours:

So which kind of cohesion was our workshop participant from Portugal talking about?[1]

[1] It was task cohesion, but there’s also a bit of social cohesion implied in the reason giving for working back, i.e. that the others in the team are doing it too.

So what is a Team, anyway? 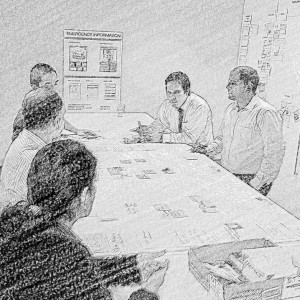 ‘Team’. It’s such a buzzword. Or has it passed beyond that, to be a word that we hardly even notice anymore? Anyway, the fate of most buzzwords is to be used so indiscriminately that they become meaningless, and that’s what we think has happened to the word ‘team’. It’s now used to mean any group of people who work together, on any task, of any nature; or even just people who work in the same organisation.

This is wrong, misleading, and unhelpful. It hides a very important distinction between teams and non-teams ..

Consider these three groups of co-workers:

Which of these groups would you call a team?

Our take on the question:

The first and second examples are not teams, because the people in them essentially work independently of one another — even though they may work in the same physical space, doing the same thing. It is possible for a person in either of these groups to help another worker, of course, but they are not dependent on one another to achieve their goal. A sale is made by an individual, and a tech support ticket is closed by an individual.

The software development team is different. They are a team, because the success or failure of the project depends not only on all of the team members doing their own jobs, but also on their co-operation. They literally cannot do the job of building the product by themselves.